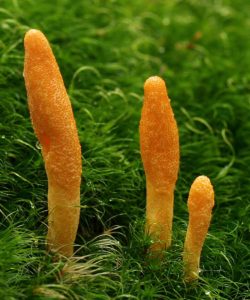 Cordyceps are a type of mushroom that is well known  for its medicinal properties. As a matter of fact, they have been used as medicine in China for thousands of years. They are known as a type of fungus which is famous for both its taste and its healthy properties. Even though it has close relations with other types of mushrooms, it’s not the same as other mushrooms and instead, it is known as a strong form of Ascomycetes fungus.

For many years this mushroom has been used as medicine to fight effects of aging in China. Now researchers have found that it can also prevent stroke. Which is also many times connected to an aging cardiovascular systems. Researchers have found that this certain mushroom contains a special ingredient known as cordycepin, which has been found to increase the effects of learning and memory in many ways. Recently there was a study published in the European Journal of Pharmacology, where the talented researchers have found out that cordycepin helps to improve cognition of many animals, and it could also potentially be effective when it comes to the treatment of stroke.

According to research in the Journal of Medicinal Food, the mushroom Cordyceps also can act as a potent antioxidant, and when it comes to memory impairment, the mushroom can improve its effect greatly. These things are extremely useful in the human body. And it is also extremely effective in preventing strokes because of its healing effects and antioxidants. Based on the research that was published in the medical journal Metabolic Brain Disease, Cordyceps can effectively prevent and treat stroke and work in that respect by decreasing brain-damaging free radicals.  Another thing that the mushroom does is that it enhances your body’s production of an organic compound that is primarily known as superoxide dismutase (SOD). This is a unique and special enzyme which is a protein and is one of the most effective and potent antioxidants inside the human body and help the body in protecting against many known and common deadly brain diseases.

Another extra benefit the mushroom has beside SOD production, and it is also described in the same research in the same European Journal of Pharmacology that the cordycepin decreased the inflammatory compound which is commonly known as MMP – 3 or matrix metalloproteinase-3. You may wonder why this is important; it’s important because this compound is increased heavily in the events of a stroke.The research also found that the Cordyceps also packs a strong anti-cancer effect and it may also lead to the possible prevention or can help in the treatment of brain cancer. More through research can certainly help in finding out the actual effectiveness of cordyceps against brain cancer.

On top of preventing stroke and brain disease, Cordyceps also has shown great promise in the area of brain or memory enhancement effects. This information was found in a study published in the Archives of Pharmacal Research.

This mushroom also has an incredible immune enhancing and energizing medicinal properties that have far-reaching health effects like preventing cancer and reducing the stress damage on your body. Many health specialists use cordyceps daily to get a healthy dose of immune system boost especially when it comes to dealing with stress or anxiety or even in some cases cancer.

Cordyceps enhancement comes in both capsule and often powder forms. You have to choose a 5:1 extract from a normal and organically grown Cordyceps mushroom, which is also processed. This needs to be done to make sure the cordyceps mushrooms have sufficient potency to get the brain boosting affects you need.

A usual dose is 400 to 600 daily. Cordyceps can heal many diseases, and it’s a great medicine when it comes to preventing stroke or cancer.  It also enhances the effects of brain health in a good way.

Here are some other reasons why Cordyceps is your body’s best friend,

Reduce dizziness: Cordyceps also reduces dizziness. Dizziness is a great problem for people who like to work for hours without a break. And dizziness can harm your effectiveness among other things. It can harm your studies or career. But cordyceps mushroom helps you prevent dizziness without costing a lot of money.

Heart disease: Heart disease is one of the main reason of death in the world. Millions of people die every year from many heart diseases like stroke, heart failure cardiac arrest, etc. Cordyceps mushroom is a great way prevent this type of incident. It has very healthy properties which allow you to keep your heart healthy.

Stamina: Stamina is a great tool for any physical or mental work. Without stamina we are useless. Without the proper supply of stamina, we feel tired, and we are easily sick and vulnerable. Stamina is also very important for athletes and sportsman. It allows your body to do the necessary work without feeling tired. And Cordyceps mushrooms has a great supply of stamina in it. It is a great way to keep your stamina alive.

Liver: Cordyceps also help improve your liver function in many ways, mostly in cases of people who has damaged livers as a result of disorders like hepatitis B. The reason is that the toxins from the body are removed by liver, increasing the liver function is one of the best ways that the cordyceps greatly affect your immune system. Research from the Department of Analytical Chemistry shows that the Academy of Chinese Sciences has found that the cordyceps positively influence the oxidative stress; amino acid; and energy metabolism, protein, and choline metabolism because of their role in helping the digestive organ system. Because of this and many other reasons, the cordyceps mushroom is unbeatable in the category of healthy mushrooms.