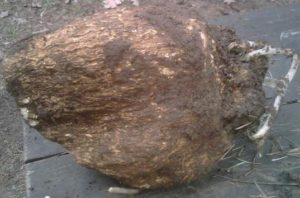 Poria or Poria cocos are one of the most famous ingredients in traditional Chinese medicine.  It is known to help your kidney and urinary tract function. Recently this mushroom has gained some traction in the medicinal world. It has made a great impact on the world of medicine. Although it is not anything new for the Chinese medicine as they have been using it for many many years. This mushroom was used as a medicine by the Native Americans as well. It’s a great example of what ancient herbal medicine is hiding as this mushrooms are not that popular in the world as a medicine. This is usually how the modern medicine is made by preserving and researching old medicine and combining technology. Poria, are also known as Fu Ling,  is used in the Chinese medicine for about 2000 years which is crazy to think as it is just becoming known to many modern doctors as a medicine. About 10% of Chinese pharmacopoeia are known to contain Poria elements. Usually Poria is used to ensure the balance and the effects of the other herbs and ingredients in the medicinal formulas or recipes, and it has been considered a tonic, diuretic, and sedative. Many research on Animal studies have shown the potential uses as an immunomodulation and anti-inflammatory agent in many ways. Mushroom Wisdom Poria give you the beneficial polysaccharides and triterpenes which helps you tostrike a balanced immune function, it increases your kidney health.

How Poria mushrooms to increase your immune and kidney health

Alzheimer’s disease: One of the deadliest diseases on earth is the Alzheimer’s disease. It is a common cause of dementia. The word dementia shows a set of symptoms and effects that can include memory loss and sometimes it is associated with thinking, problem solving, language etc. These symptoms show up when your brain is damaged by certain illness, including the famous Alzheimer’s disease. It slowly effects your memory and makes you forget your memories. In worst cases of this disease it can even make you forget your own name. Which is incredibly tragic. Which is why this disease is very dangerous. And Poria mushroom helps you prevent this disease. Some research demonstrate that the poria mushroom may help you fight Alzheimer’s disease in many ways. In a 2009 research published in the German journal Die Pharmazie, they tested on rat cells and it showed that the poria may inhibit Alzheimer’s development by decreasing its oxidative stress.

The research authors also have found out that the poria may help you shield your brain from the bad toxic effects which of beta-amyloid which is a substance which forms the brain plaques related with Alzheimer’s disease.

Immune system: Poria makes your immune system strong. It helps you fight many deadly diseases. Poria also help enhance your immune function, according to a 2011 research that was published in Planta Medica Researchers examined the available research on poria mushroom.

Along with this discovery which is a strong evidence for immune boosting and that poria can help fight inflammation, the report’s writers demonstrated that polysaccharides found in poria mushroom may help your immune response be stronger

Kidney: Poria mushroom has ingredients that protect your kidney in many ways. It helps you digest and it helps prevent diarrhea. Many doctors recommend use of Poria for kidney problems. Kidney problems can be quite the headache for many people especially people in regular jobs or students. It badly effects your performance and you’re eating habits. For many people this causes many expensive treatments that they just don’t have the money for. Poria mushroom can help prevent all this. It has kidney improving ingredients that helps you against kidney related diseases.

Anxiety: Although having anxiety every now and then isn’t a big problem but having anxiety all the time is the disorder known as anxiety. It harms your daily lives. It effects your studies, your daily activities it can even lead to depression. Which is very dangerous as it is harmful both physically and mentally. But Poria mushroom can help you prevent all this problems. As it has many anti-anxiety properties that help prevent anxiety.

Diabetes: We all hate diabetes. It’s a very common disease that can affect everyone. Especially older people. It takes away the freedom to eat as your heart desire and causes many other problems. It can cause stress and even heart failure if not managed properly. Which of course often results in death. Many researchers have found that the Triterpenes placed in the poria mushrooms can be very effective against diabetes, which was found in a 2011 research from the Evidence Based Complementary and the Alternative Medicine. As they tasted on mice , the study’s writers have found that the treatment with poria triterpenes helped in a positive way to regulate the animals’ blood sugar levels and help with insulin resistance by a great deal.

Cancer: One of the most deadly diseases that still has no cure. Cancer is one of the leading reasons of human death on earth. As its treatment is expensive sometimes the patients often has no choice but to wait for the inevitable. Which is very tragic.But good news many recent studies have found that Poria mushroom is often considered to have anti-cancer properties. Several researches on thehuman cells demonstrates that the poria mushroom may contain some anti-tumor properties and could help in fighting some forms of cancer like the pancreatic cancer and also the breast cancer. That being said it isstill too early to tell if taking poria can aid in cancer prevention. But if the signs are any indication it is very positive.